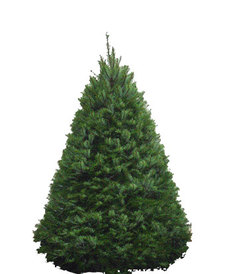 This tree is one of the dominant trees in the foothills of the Rocky Mountains, and up the slopes to medium altitudes. It has been transplanted successfully throughout most of North America. Douglas-Firs grow 40 to 60 feet and spreads 15 to 25 feet forming an erect pyramid in the landscape. In its native habitat in the West it grows to more than 200 feet tall! Its unusual cone has forked, snake-tongue-like bracts extending from each scale.

Western Grand Fir seed sources from northern Idaho have excellent needle retention and in-home performance during the holidays. With their dark green color and shiny appearance, Grand Fir needles have a silvery underside that reflects tree lights for a beautiful effect. The needles are arranged in a flat array on the twigs lending a graceful appearance to the tree. The scent of this variety is incredible. It has a powerful citrus-like evergreen aroma and is, by far, the most fragrant of Christmas trees. Crush just a few needles between your fingers to get a sample of the powerful aroma. However, the beautiful scent comes at a price. Releasing its fragrance means releasing moisture and consequently, Grand Firs do not last as long as other milder scented trees. To insure you have a fresh tree for the holidays, pick up your Grand Fir the last few weeks before Christmas. 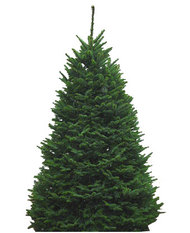 When one thinks of the traditional Christmas tree, this is it! Noble Firs have a beautiful appearance with soft blue-green needles on evenly spaced strong branches that are perfect for heavy ornaments. They are long lasting in indoors and have a pleasant, mild fir scent. Noble Firs come in a variety of styles and they present ornaments and lights in a very natural way. Some are full and bushy; others have a more open, layered appearance. They are magnificent when decorated. Its no wonder the Noble Fir outsells all the other varieties combined. Grown only in the Pacific Northwest, the Noble Fir is a high elevation tree in its native state. Noble Fir Christmas trees are grown on farms that are higher up in the mountains where they receive over 60 inches of rain annually and plenty of frosts before harvest —insuring the trees become fully dormant. These are key determining factors for needle retention and for perseverance indoors.

This Christmas if you feel like trying something new, gather the family around a Nordmann Fir! In America tree is a new type of Christmas tree but it has been used in Europe for many years, and is one of the most commonly grown Christmas tree species in Germany and Norway. Actually it is native to the Republic of Georgia and northern Turkey. Grown experimentally in Oregon for the last twenty years, superior seed and improved production methods have produced the quintessential Christmas tree. But because of limited plantings, there are not many lots offering the Nordmann Fir just yet. Nordmann Firs have beautiful soft shiny needles with a deep green color laid out in even rows on the twig. They are very durable so they last exceptionally well, usually keeping well into January. Because the branches are evenly spaced and strong, they are perfect for showing off special large or heavy ornaments. 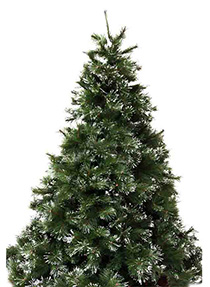 The Silver Tip is a western North American Fir native to southwest Oregon, as well as Shasta, Siskiyou and Trinity counties of Northern California and the eastern slopes of the southern Sierra Nevada. It is a high elevation tree, typically occurring at 4,600–8,900 ft., though only rarely reaching the tree line. Silver Tips are large evergreens and can grow up to 200 ft tall with 6 ft trunks! They make very popular Christmas trees, due to their fine needle structure.

Military Discounts 15% Off Any Tree

Make it a tradition!